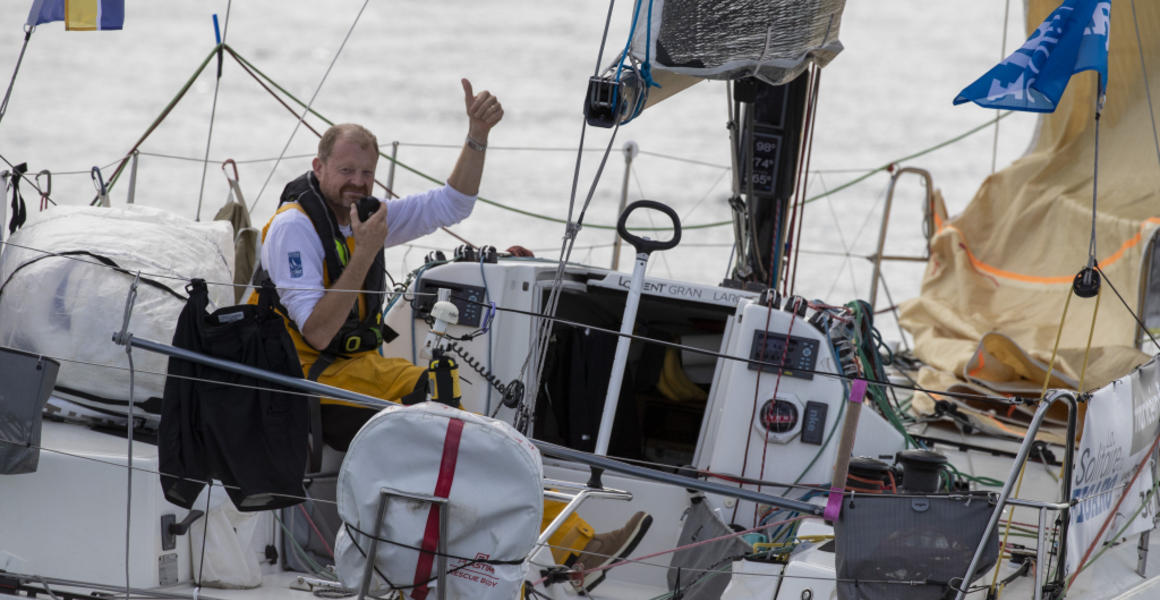 “In car racing terms, it’s like I had been racing a go-kart for years and then I found myself at the back of the F1 fleet.”

Piers Copham is the first British sailor to announce his 2023 La Transat Paprec campaign. For his first ever edition of the race, he has joined forces with Voiles des Anges, an association that offers a support network for families who have prematurely lost children, predominantly through stillbirths.

On the hull of his boat will be 100 names, a living memorial to those who have passed away. “It keeps touching people wherever I go, it’s an incredibly moving cause to be racing for,” he comments.

Copham’s route into the Figaro Beneteau fleet isn’t the most quintessential, but he has the burning fire inside to match any one of his competitors. His long-term goal is to be on the start-line of the Vendée Globe in 2028, but first recognises he needs the ‘experience of competing with the best’ in the Transat Paprec. A race he considers to be “the most iconic sailing challenge you can do, short of racing around the world.”

Humble, honest and humorous at times, he gives an open and refreshing insight into his first ever Transat Paprec campaign. Originally from the north-west of Scotland, Copham talks fondly about his Scottish roots. “I’ve been sailing since I was six and sailed a lot off the Scottish coast. I actually made my first dinghy out of an old rowing boat and used a bedsheet as the sail. I would like to think I’ve come a long way since then!” he joked.

Growing up he was influenced by his family and credits his can-do attitude to them, “Although I grew up far north of Scotland, I had a grandfather from Wales, and one from Ireland, who was married to a German lady. In some ways I had quite a European upbringing.

“One of my ancestors was captured by Napoleon, then imprisoned in Brittany, before he made his escape to Wales on a stolen frigate. I’ve always believed anything is possible.”

Copham now resides in Cambridge in the UK and has racked up a wealth of racing experience over the past few years, most recently competing in the single-handed Solitaire du Figaro, where he finished 32nd, and the Mini Transat. “The Solitaire du Figaro was a fantastic race. I had no expectations to even be able to race in the Figaro class, to me it is very much sailing at the top.

“In car racing terms, it’s like I had been racing a go-kart for years and then I found myself at the back end of the F1 fleet. I did not plan to be there, it all seemed to be too elite. But people around me gave me the confidence to go for it. I was told, ‘well you’re clearly not very fast but you are very capable!’ It’s all I needed to hear really.

“Ultimately, if you are willing to learn, there should not be a barrier. Clearly, it’s a competition, you have to be - and want to be - competitive, but I was willing to accept that I would most likely be pretty far back most of the time.

As regards coping with tough weather conditions, it’s all relative. “In last year’s Mini Transat, it took me a little by surprise to find that I was one of only six out of 90 boats that stayed out in the big storm we had. If you are on the west coast of Scotland and get a forecast like that, you think ‘oh well this is going to be a bit uncomfortable, but I’ill carry on’. But if you grow up in the west of France, where a forecast like that is seen as horrible, I imagine it’s quite different.”

Other credentials include winning the UK’s multi-sport endurance Three Peaks Yacht Race, competing in the Australian equivalent (in winds up to 77 knts), the Swan European Championships and the Fastnet, alongside his 20 years of dinghy racing in the Isles of Scilly.

Sailing isn’t Copham’s first sport, he also rows and trains every day. He has taken part in the past 10 World Master’s Championships and won a European medal. He likes the clear goal of rowing. “You are heading in a straight line with somewhere to aim. Whereas sailing is very different , you still have the same goal and somewhere to aim for, which in this case will be the other side of the Atlantic, but firstly there’s a chance you may not get there. Then there’s a number of routes you could take to get there.  It’s all about how you navigate your options that makes it a bigger challenge.

“I think rowing probably reflects my get down and do it tenacity whereas for me, sailing is much more my strategic side and how to react to changes. In some ways my professional career probably reflects both.” Copham also runs a strategy advisory company, Granta Strategy, and has a number of degrees and a doctorate in metallurgy, the study of metallic elements.

“What I enjoy the most about this fleet and this racing is it’s just a fantastic environment to be in. You may be racing by yourself at times, but you never really feel alone and for someone like me, who likes to talk a lot, it gives me time for reflection.

“Often in the intensity of racing in a large crew environment there’s all sorts of dynamics that can detract from the actual sailing, also, being honest – I find it boring at times, I like to be hands-on.

“When you are racing solo - or double handed - there is nothing but you, the boat and the sea.” Add in the beauty of the crossing, and he describes the experience as ‘very liberating’. “When you are in the middle of the Atlantic and look up, the sky seems 10 times brighter, then you look down and see the fluorescence where the dolphins have been swimming alongside, there’s really nothing like it.”

He is highly complimentary of his competitors. “I love that it’s an international community, I really enjoy the camaraderie. There are many brilliant sailors; some of the best offshore racers in the world, Olympic sailors and some who have won under 23 World Championships.

“It’s competitive but we are all learning from each other in some ways too, swapping notes and training together. It’s a group of people wanting the best from each other.The mentality is incredibly collaborative off the water. I’ve gained a real insight into what developing at this highest level is all about. It’s been such a huge pleasure. From the outside, the class can be seen as very elite so in some ways I feel like I’m helping to spread the net wider.”

For Copham, the racing format of a mixed crew is exciting but not new for him. “I think sailing is one of the most gender inclusive sports you can get, I’ve always been competing with or against talented female athletes. Both my daughters sail, one of my daughters is definitely a better sailor than I am, at least technically!

“I was hoping to entice her to enter the race with me, but her background is mostly sailing on a Swan - the Figaro would be too uncomfortable!” He is still on the lookout for a co-skipper, hoping to team up with someone in the next few months. In preparation for the race, there will be a series of pre-events, which will help those crews who have not sailed together before.

On his goals for the Transat Paprec, he said, “Well firstly, it’s to not be last. When I started racing this class, and in previous qualifiers, I was initially thinking it’s not if I come last but how last will I be… but I haven’t actually finished last yet!-So, I’ve surprised myself there.”

This will be Copham’s third year racing for the Voiles des Anges cause. Over the years he has become close to founder Celine and her family, first meeting Celine through the previous owner of his Mini 6.50 “Voiles des Anges has been around for nine years but talking about loss is an incredibly sensitive topic, it can still be quite taboo for some people.

“I’ve now done a transatlantic crossing and the Solitaire du Figaro supporting the charity. I would like to think it offers some comfort for the families. Siblings can be involved too, by following and drawing the boat, it’s incredibly rewarding to be supporting them.

“Celine and her family, as well as the current president, Cecile, in turn have been very supportive in practical terms. Celine has even offered to be my manager for my Vendée Globe campaign… I might have to take her up on that!”

Although he may have a positive outlook, he’s not unrealistic about how ambitious it will be to be on the start line of the Vendée Globe in 2028. “It’s an expensive sport, that’s for sure. I’m actively looking for sponsorship to fund my campaign.

“Between now and then the focus will be to do as much solo sailing as I can, in whatever form. If I had the budget now, I would be racing the Figaro for at least one season, if not two.”

For now, with five months to go, all focus is on Copham’s first ever Transat Paprec. “If you called me up and said the start is tomorrow, I would be like OK let’s do this then! Mentally and physically, I would say I’m feeling prepared.”