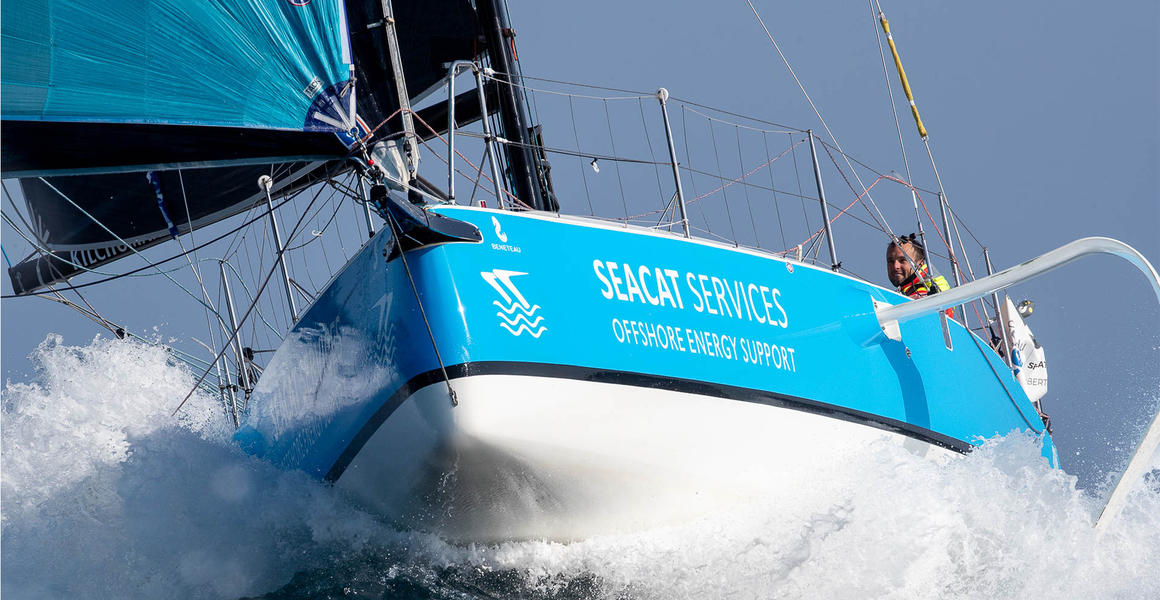 British sailor, Alan Roberts, on the next edition of La Transat Paprec and his favourite things about the race.

With nine back-to-back La Solitaire du Figaros and multiple National Championship titles under his belt, Alan Roberts can be considered as one of the most experienced single-handed British offshore sailors right now. We caught up with him last month on all things La Transat Paprec (a race where he finished in 9th position in 2021), his background in offshore sailing and his plans for the future.

Roberts was destined to be an offshore racer. He’s sailed his whole life and started racing on the dinghy scene, including Mirrors, Optimists and Toppers, followed by the 29er before a move into more ‘adult boats’, where he had success winning many titles in the International 14 fleet, the RS200 Nationals and the Endeavour Champion of Champions. Twice.

His father is a mast manufacturer who has built rigs for some of the sport’s greatest, including the likes of Loïck Peyron, Dame Ellen MacArthur and Sir Peter Blake, which growing up gave him access to the elite offshore world first-hand. “I guess going onboard their boats and then seeing the arrivals of their races really inspired me to get into the offshore scene.

“The two races I have really wanted to do from a young age are The Ocean Race and the Vendée Globe. I’m pushing hard for the Vendée globe, that’s a big goal of mine to hit the IMOCA sailing hard and try to find sponsorship to run my own project.

In 2014, Roberts applied to the Artemis Offshore Academy – a former UK-based centre of excellence for offshore sailing. “I applied for the Artemis Offshore Academy, got accepted and went on to do the Solitaire du Figaro. I enjoyed it so much that I decided to keep going (in the offshore world). It wasn’t really the plan, but that’s the way things go in life sometimes… and here I am now!”

Since then, Roberts has taken part in nine full seasons of La Solitaire du Figaro, giving him a huge amount of experience racing with and against some of the top sailors in the offshore world. “I started off living in Lorient, sailing under Tanguy Leglatin, who is a fantastic Coach, and then got invited to Port La Forêt, Pôle Finistère course au large, where I’ve been based for several years now. Moving here really gave me access to the top-level training and to the top-level racers and I’ve been very lucky since then.

“I’ve pretty much done every race that I can but only competed in La Transat Paprec (formerly La Transat AG2R) once. I’ve never quite had the funding to do a campaign myself, but I have been a co-skipper. I would have been co-skipper again, but the race didn’t happen during the covid year.

“It is an awesome race, I absolutely loved it and I’d love to be on the start line next year. For me right now, it’s the funding issue holding me back. I have a couple of ideas for co-skippers, but equally, I’m also happy to jump onboard someone else’s project again. I think I would bring a wealth of experience and a good performance mindset. I still have the Figaro on my mind a lot and I would love to be back competing… and on the podium!

“I have both a good and a bad memory of the race before, that really sticks out! I guess it’s easier to start with my worst memory… we came off the start line and were over, so we had to go back. Then the whole way across the Bay of Biscay it was just ‘follow the leader’. That was a pretty painful experience to start a race like that; several hundred miles of chasing and not having the chance to make any tactical decisions or boat speed gains to get through the fleet.

“But then the good part was once we hit some warmer weather the tactical options opened-up, we put the spinnaker up and could really drive in trans-Atlantic racing downwind, so that was really fun. Then the arrival into St Barts was magical, it was night-time but there were still so many people. Having done a lot of single-handed racing it’s always nice to share experiences with someone – all the hard times in the middle, then being able to make gains and make tactical decisions together. These are all really fond memories that stay with me.”

Roberts also spoke about the new mixed male/female format for the next edition. “I raced as a mixed crew last time and was lining up to do it mixed again. Our sport is one that can be played on a level playing field regardless of whether you are male or female, big or small, young or old.

“There are some really talented female sailors coming through the fleet, it is a great place to develop your skill set and become a good all-rounded offshore sailor so hopefully this new format for the next edition will encourage even more top female sailors to enter.

“What I personally love most about this race and offshore racing is that it’s non-stop, you are on all the time, everything makes a difference, there's no time off, there’s no wait until later to do it. There are so many variables and so many things to try and control that the race starts way before you're lining up on the start line. All the hours of planning and training all adds up and helps you when you are out there.

“It’s extreme being out in the elements, you’ve got to analyse and make safety calls, make tactical calls, you’ve got to kind of be a master of all the trades on board, you’ve got to be able to fix the engine, do the sails, climb up the mast… or dive in the water to get rid of seaweed on the rudders and keel.

His advice for a rookie going into the next edition, “Train as much as possible, do as much prior planning and preparation that you can do and talk to people who have done the race. There’s a huge pool of experience out there and it really is an experienced driven sport. Oh and check your kit… obviously!

He concludes with his advice for the next generation looking to get into offshore sailing… “Just do it! Just get out there and find out if it’s for you. France is the epicentre of offshore sailing, get there and get on the dock. But do your studies too, it’s not just about the physical sailing, it’s about the mechanical side, the engineering side, the composites, the rigging.

“Give yourself as much of a rounded background as possible, follow all the races, learn the routing software and most importantly, have fun!”